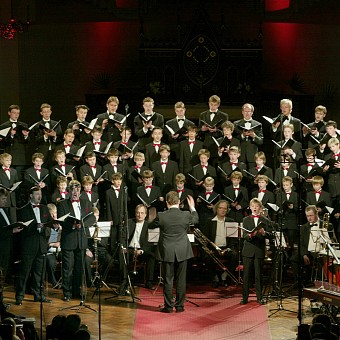 
Attention! Due to an emergency, the concert will not take place. Information about purchased tickets will follow.

Attention! Due to an emergency, the concert will not take place. Information about purchased tickets will follow.

2020 is the 70th jubilee year of the Emīls Dārziņš Music School Boys Choir, now known as the Riga Cathedral Boys Choir
The Riga Cathedral Boys Choir was founded in 1950. Alongside its work in charity events and performances for many official guests of Latvia, the choir frequently tours both the leading concert halls and churches around Latvia, and abroad. The choir has also participated in several Latvian National Opera productions. The collective has performed in Belgium, the Netherlands, Germany, France, Switzerland, Finland, Sweden, Norway, the United States, Canada, Japan and other countries.

In April of 2020, after a hiatus of more than 10 years, an important tradition has been brought back to life, with the II International Solo and Duet Singing Festival–Contest for Boys Rīgas Doms (Riga Cathedral) taking place on 13-15 April, 2020.

The performance G. F. Handel’s oratorio Messiah in the Riga Cathedral on the 12th of April, 2020 will serve as a jubilee concert as well as the opening event for the II International Solo and Duet Singing Festival–Contest for Boys Rīgas Doms.
George Frideric Handel’s oratorio Messiah is one of the most majestic works in the history of Western music. According to music professionals, if Handel’s oratorios rise as a magnificent mountain range raising above Handel’s other orchestral vocal works, then Messiah is the highest peak in this awe-inspiring range.

Despite the impressive scale of the oratorio, the composer wrote it with an unbelievable speed – it was finished in under a month. The oratorio was premiered to a universal acclaim in 13 April 1742. The famous chorus Hallelujah from Messiah has become akin to a national anthem for the audiences, with the public frequently standing up during its performance.

Messiah is written with scriptural text from the prophets in the Bible, preaching the imminent coming of Christ (the word messiah means the saviour). When the oratorio tells of the birth of Christ, the music is filled with light and warmth, but moving on to the resurrection and the second coming of Christ, the orchestra surprises with colourful and solemnly potent sound. Handel’s music is often described as truly filled with cosmic energy and spiritually unifying joy.